Dion Sujatmiko is a singer/songwriter who originally hails from Denpasar, Indonesia.  He got his start in music at seven years old, playing harmonica and later teaching himself guitar.  Dion formed Denpasar’s first hardcore punk band, Struggle Unity, which led to an active hardcore scene throughout the city.  Dion now plays a mix of folk and acoustic rock, and sings in both English and Indonesian, with many of his songs focusing on environmental messages.  Dion has been living in Philadelphia since 2011, and continues to explore his art, playing music in addition to being a painter and filmmaker.

Click here to read an article about my song protesting a proposed project to build a fake island off the coast of Bali.  The project would be environmentally destructive and hurt the local fishing economy. 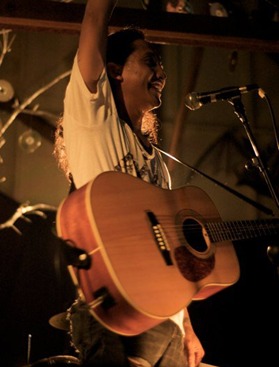 Live tracks fresh from the studio