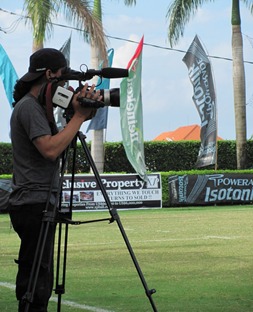 With a degree in Digital Cinema and years of experience behind the camera, Dion is available for all kinds of videography and editing projects.  Dion worked with Khisi Media and Bali Photo Video for five years, on projects ranging from weddings, to commercials, to music videos, both shooting footage and editing.  He has also worked on his own films, including a documentary on salt production in Indonesia called "Cerita tentang Garam," and a short drama called "Queen Bee."  In addition, Dion has worked on production crews, including for Kathy Huang.  He enjoys combining his love for music with his passion for film, by creating video art installations.  Dion continues to work on freelance video projects of all kinds.

Click here to read an article about my song protesting a proposed project to build a fake island off the coast of Bali.  The project would be environmentally destructive and hurt the local fishing economy.